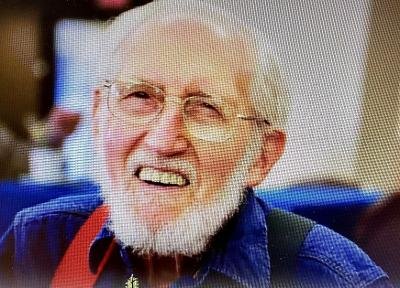 Please share a memory of Walter to include in a keepsake book for family and friends.
View Tribute Book
Walter Harold Barc, Jr. passed away peacefully at his home in Tawas Village on June 3, 2021. He was 94 years old. Walter was born and raised in Detroit, where he met his wife of 71 years, Virginia, who lived down the block. Walter was a veteran of WWll, where he proudly served as a Seaman Second Class/Gunner’s Mate in the US Navy on the USS Mayo (DD-422), a Benson-class destroyer. He earned several medals, including the Victory Medal, the Asiatic/Pacific Area Campaign Medal, the American Area Campaign Medal and the European/African/Middle Eastern Campaign Medal. He had a gift for telling others about his war-time experiences: the stories-high waves in the Pacific brought on by a typhoon, the camaraderie and antics of his fellow seamen, and the ports he would pull into around the world. After the war, Walter returned to Detroit where he found employment with Chrysler. He left that position to start a career in Tool and Die with the Valeron Corporation where he worked until he retired. His work ethic, attention to detail, and leadership were recognized by the Company, who promoted him to be Supervisor at the Valcraft operation in East Tawas. He took pride in building strong relationships with his staff and was known for his compassion and consistency. Walter’s empathy (mixed with a touch of quirkiness) led him to wear a bell when he was on the shop floor so that his work crew would have some advance warning when he came by to check their work. Even after retirement Walter was not one to stay still. He was active with the Saint Vincent de Paul Society in Tawas City (or as he called it, Saint Vinny’s). He started in pickup and delivery, but what he truly loved was his role as a cashier, where he got to talk with the customers and get to know his community. Best of all was the camaraderie: his time spent with Joe, Jimmy, Wanda, Glenda, and Joyce were the true treasures that he kept from the store. Walter enjoyed taking his dog, Kiska, on long walks through the woods on his property– past the pet cemetery and the deer lick, down the trail that would take him past his son’s sprawling garden, and over the railroad tracks where his children would tape pennies to the tracks to flatten as the trains rode past. He knew the pace of his companions and would pause to let his granddaughter, Kristin, or grandson, Dane, look over something that caught their eye – an old railroad spike or a particularly interesting rock. Walter also loved gardening, reading, exploring the UP with his children and big bowls of ice cream. While at times Walter’s methodical nature would occasionally drive his family up the wall (usually when they were waiting for him to finish dinner) they appreciated the fruits of his patience. His skill as a woodworker led to a set of handmade shelves that he crafted for his daughter so she would have a place to put her books when she went to college, and his whole family enjoyed spending time in the addition to his first home in Livonia that he designed and built. Said simply, Walter loved his wife. He was fully supportive of Virginia’s art career, encouraging her to attend art school and spending hours at shows where she exhibited, where he proudly discussed her art and helped with sales. With great care, he would set up her booths and carefully pack her paintings and ceramics for each show. Walter treasured the winter months he spent in Hawaii with Virginia. He spoke fondly of days spent body surfing, looking for whales, and exploring the volcanic landscapes of Haleakala and Kilauea on bicycle. Walter is survived by children, Michele, Mark (Sandy) and Jacquelyn (John); his grandchildren, Kristin and Dane, and his great-grandchild Zaynah. A memorial service will be held at a later date. In lieu of flowers, please consider a contribution in Walter’s name to Saint Vincent de Paul of Tawas City. To sign online guestbook, visit www.hyattewald.com Arrangements made with the Hyatt Ewald Funeral Home.
To send flowers to the family or plant a tree in memory of Walter Barc, please visit Tribute Store

Look inside to read what others have shared
Family and friends are coming together online to create a special keepsake. Every memory left on the online obituary will be automatically included in this book.
View Tribute Book
Services for Walter Barc
There are no events scheduled. You can still show your support by sending flowers directly to the family, or planting a memorial tree in memory of Walter Barc.
Visit the Tribute Store

Share Your Memory of
Walter
Upload Your Memory View All Memories
Be the first to upload a memory!
Share A Memory
Send Flowers
Plant a Tree