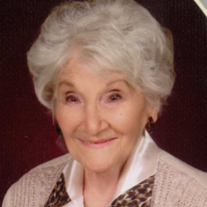 Please share a memory of Tadzia to include in a keepsake book for family and friends.
View Tribute Book
MacDonald, Tadzia Bay City, MI Tadzia (Carvel-Korolkiewicz) MacDonald passed away on June 28, 2016 at the age of 93. She was born in Saginaw Michigan on October 24, 1922 to the late Josephine and Anthony Klimkewicz and lovingly adopted by her dear parents Edward and Lottie Korolkiewicz. She graduated from Saginaw High School in 1941, and in 1943 she married Raymond "Pete" MacDonald of Bay City. After Pete's returned from overseas in 1946, they made their home in Bay City Michigan. She believed her life was blessed by God and thanked him each day in prayer and thankfulness for His grace and mercy. She loved being a parent and homemaker and was active in decorative painting. She was a member of the Fremont United Methodist Church, the Bay City Garden Club, and her card club for 60 years. She is survived by her loving daughters, Cara Barcia of Bay City and Sue (Glenn) Ginther of Salem SC; granddaughters, Steffanie Abbs and Carrie Barcia of Bay City; two great-grandsons, Brayden Alvarado and Noah Ginther. Also surviving are two half-sisters, Sophie Klimkewicz of Saginaw and Josephine Roberts of Perry MI; brother, Al Klimkewicz of Saginaw; brother-in-law, Stanley MacDonald of Bay City; sister-in-law, Mary Martin of Bay City; beloved cousin, Jean Adams of Fairgrove; many dear nieces and nephews. She was predeceased by her husband of 67 years, Raymond MacDonald; grandson, Ryan P. Ginther; several brothers and sisters. The family would like to thank her caregivers at Bay Shores Senior Center for the wonderful treatment that was shown to her. God Bless You. A Memorial Service will be held at 11 AM on Thursday July 21, 2016 at Grace Church- West Campus, 4267 Two Mile Rd., Bay City, MI. The family will receive friends at the church on Thursday from 10:00 A.M. until the time of service. In lieu of flowers, those considering an expression of sympathy are asked to consider memorial contributions to the church. To sign online guestbook, visit www.hyattewald.com
To send flowers to the family or plant a tree in memory of Tadzia MacDonald, please visit Tribute Store

Share Your Memory of
Tadzia
Upload Your Memory View All Memories
Be the first to upload a memory!
Share A Memory
Send Flowers
Plant a Tree