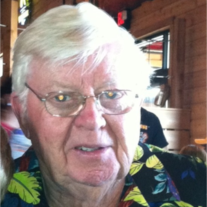 Please share a memory of Paul to include in a keepsake book for family and friends.
View Tribute Book
Newlin, Paul P. Bay City, Michigan Mr. Newlin, age 83, died on Saturday July 13, 2019. Paul was born in Detroit, on July 18, 1935 to the late Morris and Anna (Bucklan) Newlin. He married the former Joan Hobson in 1960. He worked for the Fenton Post Office for 40 years, retiring in 1995. Paul was an avid reader, gardener and fisherman. Mr. Newlin is survived by his 2 children, Jeff (Linda) Newlin of Holly and Julie Newlin of Bay City. Also surviving are 2 grandchildren, Alex Newlin and Kasey Deschler of Lapeer; daughter in law, Kara Deschler of Lapeer; his sister, Kathy (Ralph) Brooks of Syracuse, New York; many nieces and nephews. He was preceded in death by his wife Joan in August 2007 and his son Steven in February 2015. The family would like to give a special thank-you to Ashley Lange his caregiver and confidante for her wonderful care given to Paul and to his wonderful neighbors Bill, Diane, Dan, Larry, and Marie for their compassion and friendship. Paul's family and friends will celebrate his life in a private setting per his request. Those considering an expression of sympathy are asked to consider memorial contributions to the Saginaw Basin Land Conservancy, 706 S. Euclid Avenue, Bay City, Michigan 48706. To sign online guestbook visit www.hyattewald.com All sympathy store items must be sent directly to the family home.
To send flowers to the family or plant a tree in memory of Paul Newlin, please visit Tribute Store

Look inside to read what others have shared
Family and friends are coming together online to create a special keepsake. Every memory left on the online obituary will be automatically included in this book.
View Tribute Book
Services for Paul Newlin
There are no events scheduled. You can still show your support by sending flowers directly to the family, or planting a memorial tree in memory of Paul Newlin.
Visit the Tribute Store

Share Your Memory of
Paul
Upload Your Memory View All Memories
Be the first to upload a memory!
Share A Memory
Send Flowers
Plant a Tree