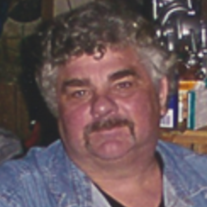 Please share a memory of Perry to include in a keepsake book for family and friends.
View Tribute Book
Nelson, Perry E. Rose City, Michigan In loving memory of our dear brother, Perry E. Nelson. He was born March 29, 1950, age 69 years. He passed on to meet Jesus and his family members, who went on before him at around 12:45 A.M. on November 2, 2019 with his brothers, sister, sister-in-law Sheila and brother-in-law Ted by his side. Perry was a very giving & loving person. He had a great love of animals, but especially adored dogs. Perry being the giving person he was, wanted to donate his body to the Gift of Life, but certain circumstances prevented his family from honoring his wish. He was a Vietnam veteran with the US Army and a kitchen supervisor while in the Army. He also retired from Bay City Powertrain and was a member of UAW Local 362. Perry loved to catch fish and eat fish. He also liked to hunt, although it had been many years since he did either. He was a very good baker especially bread and rolls. He could make a culinary delight out of nothing. He leaves behind to cherish his memory, his brothers Gary (Carol) Nelson, Larry Nelson, Lynn (Sheila)Nelson, Wayne (Lou Ann) Nelson, Terry Nelson, Jerry (Tana) Nelson, his sister Linda (Theodore) Schank. Also surviving is his brother-in-law Steve Pelton and many nieces, nephews, cousins, friends, and a very special friend his doggie Rascal. He was preceded in death by his parents Ford and Pauline Nelson, his dear grandma Jannetta Conway, sister Dolly Pelton, brother Wyatt Nelson and two infant sisters; Alla May and Brenda Lee. He will be dearly missed and never be forgotten. We All Love You Soooo Much Perry. We will see you again someday. A graveside service and military honors will be held at 1:00 P.M. on Thursday November 21, 2019 at the Great Lakes National Cemetery, 4200 Belford Road, Holly, Michigan 48442. Those planning an expression of sympathy are asked to consider memorial contributions to the Wishes of the Family. To sign online guestbook visit www.hyattewald.com. 6
To send flowers to the family or plant a tree in memory of Perry Nelson, please visit Tribute Store

Share Your Memory of
Perry
Upload Your Memory View All Memories
Be the first to upload a memory!
Share A Memory
Send Flowers
Plant a Tree