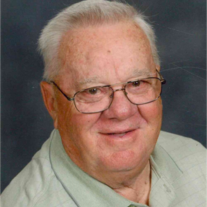 Please share a memory of William to include in a keepsake book for family and friends.
View Tribute Book
Krause Jr., William J. Essexville, MI William, age 82, passed away Tuesday, December 3, 2019. He was born in Bay City on June 15, 1937 to the late William J. and Winifred M. (Weiler) Krause Sr.. He was a graduate of St. James School, served his country from 1960 â€“ 1962 in the U. S. Army during the Korean War. He worked for Industrial Brownhoist, and retired from the Hampton Township Landfill where he was affectionately known as "Mr. Bill". He was a member of St. Jude Thaddeus Catholic Church, the Knights of Columbus Council #2740, and the V. F. W. He had coached the Essexville Little League and enjoyed bow hunting, fishing, taking casino trips, and helping at the Lenten Fish Fry. His greater joy however, was being with his family and attending all of his grandchildren's school and sports events. He is survived by his wife, the former Eleanor Coppler, whom he married July 18, 1964; his children, Wendy Krause, Angela Sanborn, and Michael (Karen) Krause; his grandchildren, Noah, Jonah, and Karina Krause; his brother, Thomas Krause; sister, Betty Lou Dalton; and many nieces and nephews. He was predeceased by his brother and sister, James Krause and Mary Ann Antcliff. A Funeral Mass will be held at 11 A.M., Tuesday, December 10, 2019 at St. Jude Thaddeus Parish, St. John the Evangelist Catholic Church, 614 Pine St., Essexville Michigan. Fr. Dale Orlik will officiate with burial following in Floral Gardens Cemetery. The family will receive friends at the Hyatt Ewald Funeral Home, 700 N. Monroe St., Bay City Michigan, Monday, December 9, 2019 from 2-4 P.M. and 6-8 P.M. Those planning an expression of sympathy are asked to consider Memorial Contributions to St. Jude Thaddeus Parish or the K of C Council #2740 Scholarship Fund. To sign online guestbook, visit www.hyattewald.com Arrangements made with the Hyatt Ewald Funeral Home.
To send flowers to the family or plant a tree in memory of William Krause, please visit Tribute Store

Share Your Memory of
William
Upload Your Memory View All Memories
Be the first to upload a memory!
Share A Memory
Send Flowers
Plant a Tree