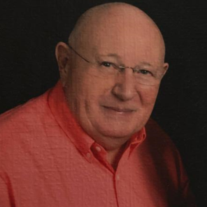 Please share a memory of Robert to include in a keepsake book for family and friends.
View Tribute Book
Anderson, Robert D. Venice, Florida formerly of Grand Blanc, Michigan Robert D. Anderson, 88, of Venice, FL, formerly of Grand Blanc, MI stepped into God's presence on January 2, 2020 in Columbia, TN. In January of 2019, Robert moved from Venice, FL to an Assisted Living in Spring Hill, TN to be near his son and daughter-in-law, Scott and Laurie Anderson. Robert was born on June 11, 1931 to Forrest and Elizabeth (Bass) Anderson. After retiring from General Motors in Flint, Robert & Myra moved to Florida. He was preceded in death by his wife, Myra in June of 2017. He is survived by his son, Scott and his wife Laurie of Columbia, TN, his grandchildren, Lindsay (Jason) Fort and Brad (Rachel) Anderson, cherished great grandchildren, Paxton, Caleb and Grant. Robert's life will be celebrated on January 24, 2020 at 11:00 A.M, where the family will receive friends at a memorial at Sarasota National Cemetery. He will be laid to rest following the memorial.
To send flowers to the family or plant a tree in memory of Robert Anderson, please visit Tribute Store

Look inside to read what others have shared
Family and friends are coming together online to create a special keepsake. Every memory left on the online obituary will be automatically included in this book.
View Tribute Book
Services for Robert Anderson
There are no events scheduled. You can still show your support by sending flowers directly to the family, or planting a memorial tree in memory of Robert Anderson.
Visit the Tribute Store

Share Your Memory of
Robert
Upload Your Memory View All Memories
Be the first to upload a memory!
Share A Memory
Send Flowers
Plant a Tree